Posted on November 10, 2017 by elizabethbauer

My niece is spending a semester abroad in Nepal. In honor of her adventure, it’s time I finally publish our adventure in Nepal… from… ahem… two years ago. So yeah, that pregnancy and baby thing really set me back on our travel posts. Better late than never!  We booked our trip with grand expectations. Himalayan adventures in films and magazines put Nepal at the top of our list. We were living in Abu Dhabi and given that Kathmandu was a four hour flight, we didn’t hesitate to book a trip. 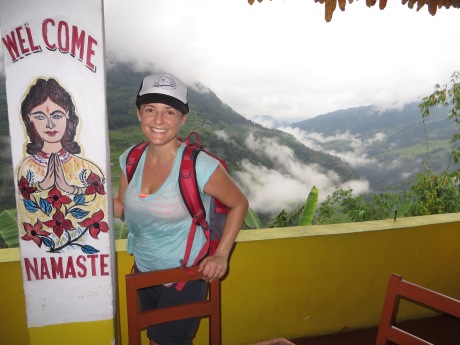 Our dream for Nepal consisted of a strenuous multi-week adventure to the remote regions of the Himalayas but we only had a few days so we decided on a multi-DAY trek instead. If Nepal was as amazing as we hoped, we would return.

So here’s the big take-a-way. Our trip didn’t meet our expectations and was a disappointment. Fortunately though, Sabine is experiencing a very different Nepal. One that is living up to her expectations. Her pictures and stories are making me want to go back and recreate our dream adventure. But for now, here is our trip in a nutshell. And maybe a few things to think about if you decide to plan a visit.

I’m a glass half full kind of gal so starting with the negatives feels off but since there are lessons in our negatives, it’s where I’m going to begin. I’ll save the highlights for last.

One of our trek hotels 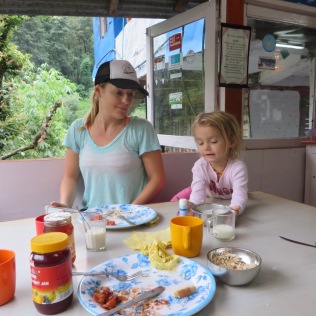 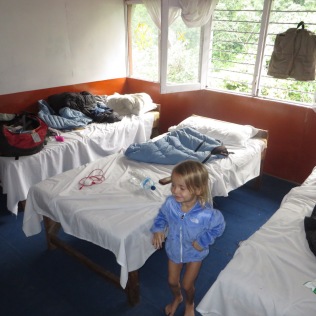 One of our rooms from our trek

We came 8,000 miles  (yes only 4 hours from Abu Dhabi but a long way from Southern California) to see the Himalayas and guess what? There was cloud cover the entire time. We hiked in The Himalayas for four days and never saw them. I love mountains and it was the only part of the trip I was counting on. Not seeing one snow covered peak was a big big BIG disappointment.  Picture on the left is us in front of the Himalayas. Picture on the right is what we were supposed to see!

Here we are in front of the Himalayas. ha. 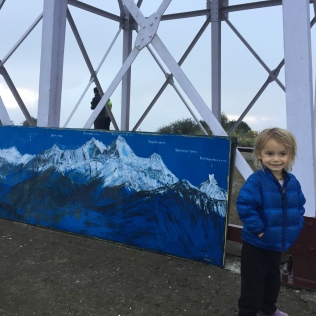 That is the view we were supposed to see

Kathmandu is densely populated and according to World List Mania, Nepal is the 4th poorest country in Asia. Coming in after Afghanistan and Yemen. To give you another idea about where it ranks in comparison to other countries in the world, check out this Global Finance Rating. Due to the earthquake’s displacement of over 2 million people, the state of the country was even worse when we were there. I know this impacted our impressions. I was not prepared. We have traveled to many third world countries but Kathmandu, post earthquake, was an entirely new level of third world. One where human suffering was staring us in the face. I was afraid someone was going to take the clothes off my back and run off with our three year old. I wish I had been more prepared, I wish I had done my research, I wish I could have done something to help. It takes time to shake your privilege when traveling to post-disaster areas and time to adjust to suffering. It also takes time to learn how our privilege can be of service.

PLAN, communicate, work with a reputable company, and do your research. Prepare for spending time in a poverty stricken country and figure out how you can give some of what you have to help people who have less.

Here is a 5m movie of our video footage set to music. Because we spent so much time walking, the footage is a little shaky. We have since invested in a stabilization device!

To read more about Nepal and the wonderful experience my niece is having  integrating in the culture click here to check out Sabine’s blog.